Chapter 13: The Maison de la Paix, or the Art of Rounding the Angles

The six petals of azure glass, strung like a garland along the train tracks in Sécheron, are a manifesto for peace: the fluid, sinuous structures reflected in each other symbolise both the fragility and complexity of peace, and its supremacy over the banality of violence. Its owner, the Graduate Institute of International and Development Studies (IHEID), is in fact a product of the peace of the 1920s and 1930s, a peace as brief as it was fruitful.

Established in Geneva in 1920, the League of Nations attracted the best minds of the time in matters of international policy. The Swiss professor William Rappard proposed to create an academic institution centred on these valuable intellectual resources, thus enabling students to benefit from their presence in the city. The Laura Spelman Rockefeller Memorial Fund agreed to support the new institute of international studies, on the condition that the Swiss government match its donation. According to Rappard, the Fund’s generosity originated in a kind of regret: “It was all the more inclined to listen to us as several of its leaders were inconsolable over the success of President Wilson’s opponents in barring their country from the League of Nations.”(1)

The Institut universitaire des hautes études internationales was founded in September 1927, with initial funding of 100,000 francs from the American foundation and 100,000 francs from the federal and cantonal governments. Its mandate was to train students in international relations using documents, experiences and personal contacts provided by the League. “We shall seek in Geneva what can be found only in Geneva,” Rappard explained (2). 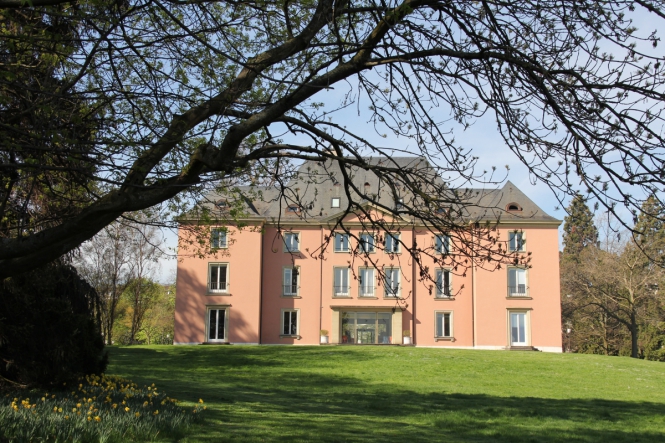 The Barton Villa next to the lake, where lived the Institute of International Studies, 1938-2013
© DR

Created to support the grand pacifist scheme of the post-World War I era, the Institute outlived its demise. In the 1950s, after the Rockefeller Foundation withdrew its support, the federal government and the canton shared the costs. Housed since 1938 in the Villa Barton, a grand lakeside property bought by the federal government, the institute was transformed by Rappard’s successor, Jacques Freymond, into an internationally renowned research centre. During decolonization, a parallel institution, the Centre genevois pour la formation des cadres africains, was created, becoming the Institute of Development Studies (IUED) in 1977.

The cards were reshuffled again in the 1990s, after the Cold War ended. In 1996, Switzerland joined NATO’s Partnership for Peace programme. As its contribution to peace-keeping efforts at a time of escalating local and regional conflict – including in Europe, with the outbreak of war in the former Yugoslavia – the Swiss government created the Geneva Centre for Security Policy (GCSP), an international foundation tasked with training diplomats, officers and career civil servants from European, North Atlantic and Mediterranean countries. It hoped that the GCSP would eventually move into one of the buildings surrounding the Place des Nations, in Massimilano Fuksas’s plan for the square. In 1998, however, the project was rejected in a popular vote, and the GCSP found temporary refuge in the World Meteorological Organisation building.

That same year, the Swiss government showed its commitment to eliminating anti-personnel mines by founding the Geneva International Centre for Humanitarian Demining (GICHD). In 2000, it also established the Geneva Centre for the Democratic Control of Armed Forces (DCAF) to promote good governance in the security sector.

Space was now needed for the three federal centres and the library of the Graduate Institute, which had to leave the former ILO building, now given to the WTO. Where could they go? The Swiss government bought a long triangular plot next to the train tracks, between the Avenue de France and Avenue de la Paix, from the Swiss National Railways, on which it planned to build a “Maison de la Paix” (House of Peace) for the three centres, the Graduate Institute and the library. An architectural competition was held in 2002, with first prize awarded to JLCG-Joao Luis Carrilho de Graça and Pfaehler & Zein. But financial complications soon thwarted the project. 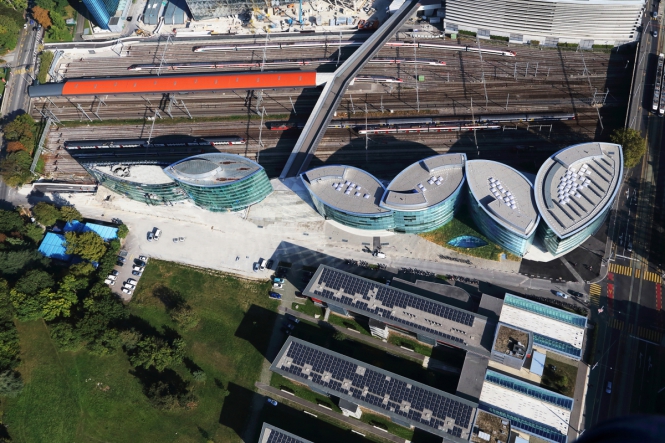 A wicked triangular parcel next to the railway
© Gérald Sciboz / Ipas

The Swiss and Geneva governments allocated 77 million for a building on the unwieldy trackside plot, which the Wilsdorf Foundation would buy to donate in the form of a 99-year lease. This time, however, the client was not the state but the Graduate Institute: an independent private foundation. The Graduate Institute would own the buildings – with the centres as its obligatory tenants – and therefore oversee its construction and financing, shouldering the responsibilities of a borrower toward the banks (starting with a 56-million franc loan). Its independence also enabled fundraising, with private donors contributing 34 million francs to the project.

As the client, the Institute placed academic activities at the centre of the architectural project, which would combine classrooms, an auditorium, a library and a cafeteria in an accessible and comfortable “knowledge centre” similar to the Learning Centre at the Ecole Polytechnique Fédérale de Lausanne. An architectural competition was held in 2008. The building initially had to provide 21,300 m2 of floor space, at a cost of 167 million francs. Out of 50 submissions, six went on to the second round. However, only the first and second prizes overcame the triangular plot’s unwieldiness, through a whirlwind of ellipses, spirals and curves.

The winners, Eric Ott and his colleagues from the architectural firm Ipas, belong to a generation of architects condemned to wrestle with mediocre plots, after all the prestigious sites have been developed. Imagination is therefore essential. The newest addition to international Geneva’s built environment, the Maison de la Paix thus arose from a railway siding. “Beautiful Geneva” has run out of space, and now we must live with amid trains, roads, offices and factories. In fact, the competition brief specified that the area was designated for extensive urban redevelopment. 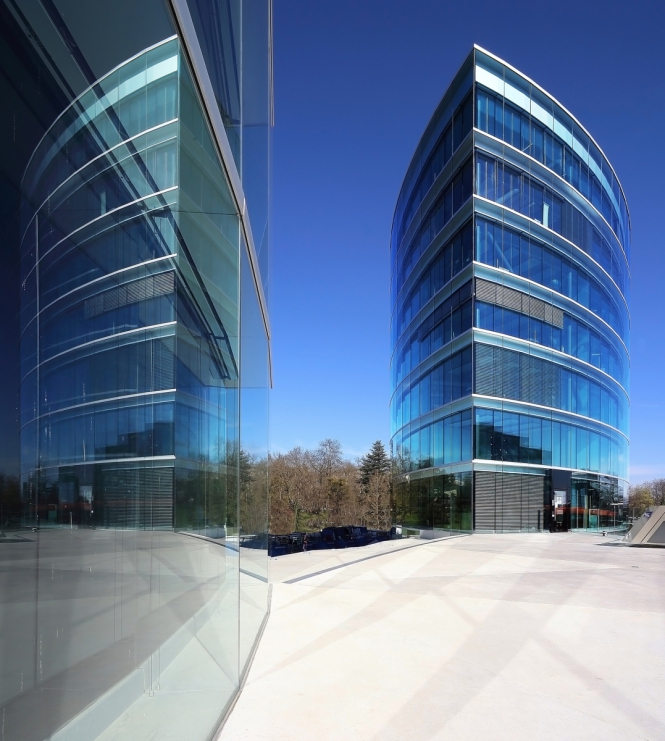 Eric Ott turned that challenge into poetry. With a flower’s insouciance, his six “petals” – the first four containing the Institute and centres, the fifth and a sixth commercial buildings – avoid straight lines. Nothing in this series of buildings is straight, from the external envelope to the inner walls, stairs, corridors and rooms. Even the gently curved library shelves reveal the architect’s resolve to round every angle, only to emphasise them at the last minute; is that not how one should proceed in a house of peace? 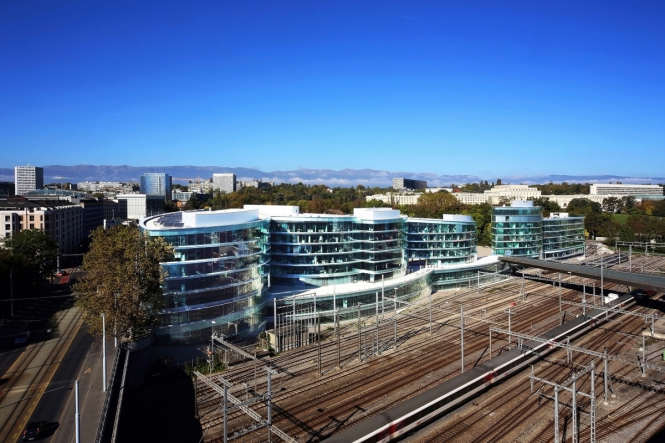 The rounded angles are a technical tour de force. The six buildings rise from a continuous plinth extending from Avenue de France to Avenue de la Paix. The structure consists of reinforced concrete slabs placed on a tubular frame, reinforced by diagonal braces and concrete stairwells at the point of each petal. Twenty-metre-deep piles driven into the sandstone bedrock anchor the building. An A-shaped beam inside the first petal’s façade supports the 40-metre cantilever above the main entrance, and the grand spiral staircase in the atrium is also cantilevered. 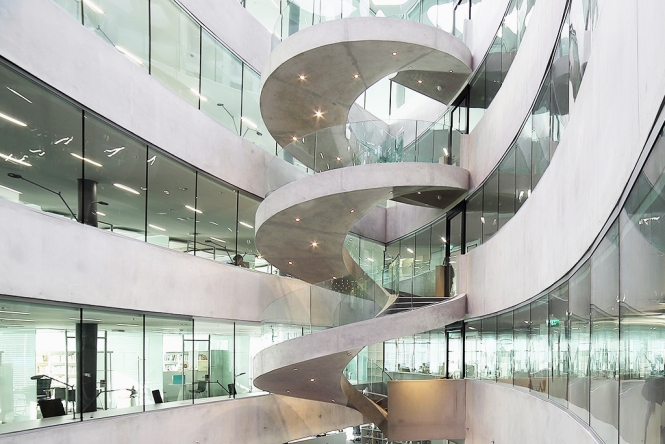 The cantilevered ellipsoidal staircase of the atrium
© Gérald Sciboz / Ipas 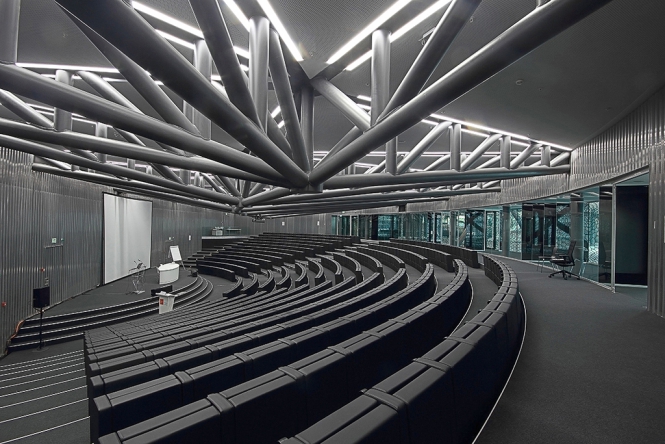 The Ivan Pictet Auditorium is attached to a cluster of trusses and beams affixed to a hidden 90-centimetre-large wall supporting the structure’s full weight. This design gives each of the auditorium’s 600 seats a view unobstructed by columns. The two-storey library on the lower ground floor spreads its elegance across three buildings, with 350 workstations tucked into its curves. The 360-degree rooftop restaurant in the fifth petal complements the public cafeteria in the first, adding to the aim of making the Maison de la Paix the focal point of the international quarter. This goal is also embodied in the pedestrian bridge, covered by a 37-metre-long cantilevered roof, which leads over the train tracks to the monumental staircase of the “interpetal”.

For the pedestrians, from the Ariana to the lake
© Gérald Sciboz / Ipas

A work of art, commissioned by the city of Geneva from the architect Pierre-Alain Dupraz, the bridge connects the Maison de la Paix to Sécheron train station and the surrounding neighbourhood, reinforcing the area’s international nature. The long-held dream of a pedestrian walkway between the Ariana and the lake is gradually taking shape, though its overall coherence is somewhat undermined by the number of players involved.

The Maison de la Paix is the beating heart of an academic and non-academic campus that includes, on the one hand, the Graduate Institute, its Student House and its various programmes hosted in the Barton and Moynier villas, and, on the other, the federal centres and tenants of the commercial buildings, all chosen for their focus on peace or sustainable development.

With the addition of the University of Geneva’s new biotechnology campus across the tracks, in the former Ares Serono complex, a new society of students and researchers are rapidly transforming the urban wasteland of Sécheron into a magnet for the world’s brightest minds. 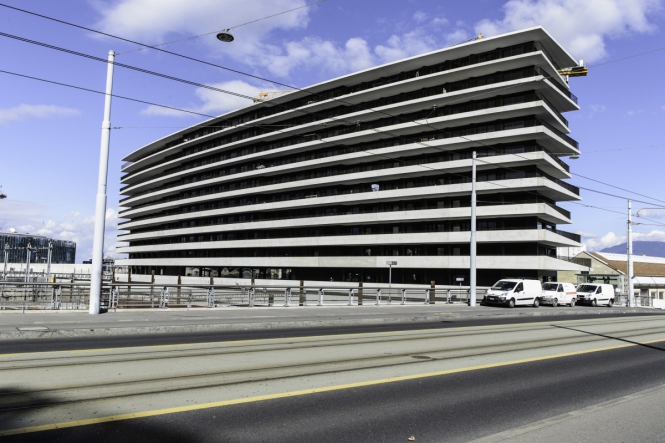 The Student House, inaugurated in 2012, thanks to the 20 million francs donation from Edgar et Danielle de Picciotto
© DR

Eric Ott’s petals proclaim that change with light-hearted joy. The mischievous architecture masks their monumentality through the startling interplay of forms and transparent materials. The building radiates presence without seeming to impose itself. It is playful from head to foot, each detail ostensibly designed to challenge expectations. Like Rino Brodbeck and Jack Roulet, architects of the World Meteorological Organisation down the hill, Eric Ott has fashioned a seductive urban poem from an ugly space. This, in fact, is the only freedom left to 21st-century architects, since the dogmas and styles of the past century have lost their supremacy and buildable spaces have become a rarity.