This seventh article in the series on the architectural history of international organizations in Geneva focuses on the decision to locate the International Telecommunication Union (ITU) at the Place des Nations. It describes a first attempt to implement André Gutton’s proposal for the square, and the restrictions it imposed on both architects and users. Though more modest than originally planned, the ITU block and tower nonetheless contributed to the move toward modernism in Geneva’s international quarter.

In 1948, the International Telecommunication Union (ITU) moved from Bern, its historical home since 1865, to Geneva. Formerly known as the “Telegraph Union”, it was responsible for setting standards to ensure the smooth global operation of the various telecommunication technologies invented over the years. Today, this organization, which celebrated 150 years in 2015, plays a vital role in defining systems of standards applied around the world, including on the ocean bed and in outer space. In practical terms, the ITU is a superpower, responsible for coordinating and negotiating all technical issues related to telecommunications among its 193 member states and 700 public and private institutions.

An imposing monument in honour of the Telegraph Union, unveiled in Bern in 1908, sought to represent the promise of this new technology. That promise has been more than fulfilled since then, and today no one monument could symbolize all of the ITU’s achievements.

After a long wait, the powerful organization finally built itself a tower — but one so unassuming in the urban environment that it fails to convey the true importance of what goes on inside it every day. In a sense, the ITU tower encapsulates the various urban planning dilemmas facing international Geneva, chiefly ones of location, size, style, and cost. 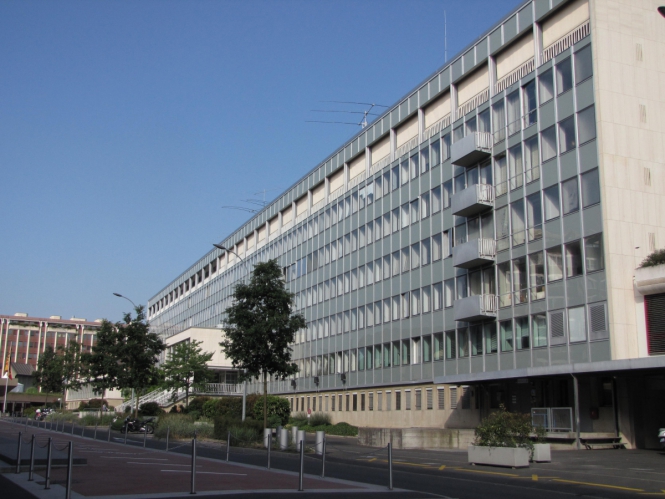 When the ITU joined the UN in Geneva, as a specialized organization, no arrangements had been made for it. Its employees were shoehorned into various offices around town until permanent premises could be found. Before long, the ITU complained of the discomfort of its situation and the slowness of decision-making. Various possibilities were considered until a solution that everyone could agree to finally emerged in 1956: the canton of Geneva would build offices that it would lease to the ITU, with the option to buy over the medium term.

The ITU insisted that the building overlook the Place des Nations. In retrospect, this demand led to several unfortunate consequences. There was no architectural competition this time. Instead, the commission was given to architect André Bordigoni, a member of the Genevan government’s urban planning committee. How would he go about the task?

That same year, 1956, saw an architectural competition held for the Place des Nations. Bordigoni had to wait until after the results were announced to finalize his blueprints. As mentioned in Chapter Three, the Frenchman André Gutton won the competition. Once his plan for the square was approved, the plans for the ITU were modified to better align with it. The first stone was laid in May 1958.

A 120-metre-long slab, with an elevated ground floor and five upper floors, Bordigoni’s structure extended along the Rue de Varembé to face the Place des Nations on its north side. It formed part of the melody of high-rises and office blocks in the leafy concerto that Gutton had imagined for the square. His plan dictated the size of the building and limited the freedom of the architect and the future tenant, who unsuccessfully lobbied to build higher.

Construction proceeded at a snail's pace due to both architectural disagreements and technical challenges. In 1959, the ITU’s secretary-general complained to Swiss Federal Councillor Max Petitpierre that the Swiss authorities were slow to meet his institution’s demands for land and funding. The World Health Organization had apparently been offered far more generous terms, and he felt the ITU should be treated equally. The rent of 300,000 Swiss francs per year, he grumbled, was twice as high as provisioned in his initial budget. After the meeting, Petitpierre warned the Genevan government that “the ITU might relocate its headquarters” if it didn’t get what it wanted (1).

For Geneva, from the moment the international organizations first set foot in the city, relocation was tantamount to a nuclear threat. Though never explicitly stated, the mere suggestion succeeded in unlocking the trickiest negotiations between the Swiss authorities and their foreign guests. It is amazing how a little pressure can make ideas materialize as if by magic!

Abracadabra! On 3 May 1962, the ITU was inaugurated in the presence of U Thant, Secretary-General of the United Nations. It formed part of a trio of glass and concrete buildings bordering the Place des Nations to the west — along with the former World Meteorological Organization (WMO), designed by Ernest Martin, and the United International Bureaux for the Protection of Intellectual Property (the ancestor of the World Intellectual Property Organizations, WIPO), designed by Pierre Braillard.

Like its neighbours, the ITU featured non-structural façades called “curtain-walls”, which grew popular after the Second World War thanks to improvements in construction techniques (for concrete, steel, glass, glues, and insulation, among other materials). Internal columns, rather than external walls, supported the weight of the structure, enabling lightweight filler materials to be used for the façade. Today, this international, glass-and-aluminium style, introduced to Geneva by the architect Marc-Joseph Saugey in his Plaza Cinema building, is a familiar sight. Back then, however, the three modern structures overlooking the Place des Nations contrasted starkly with the heavy stone façades of earlier buildings such as the Palais and the ILO. 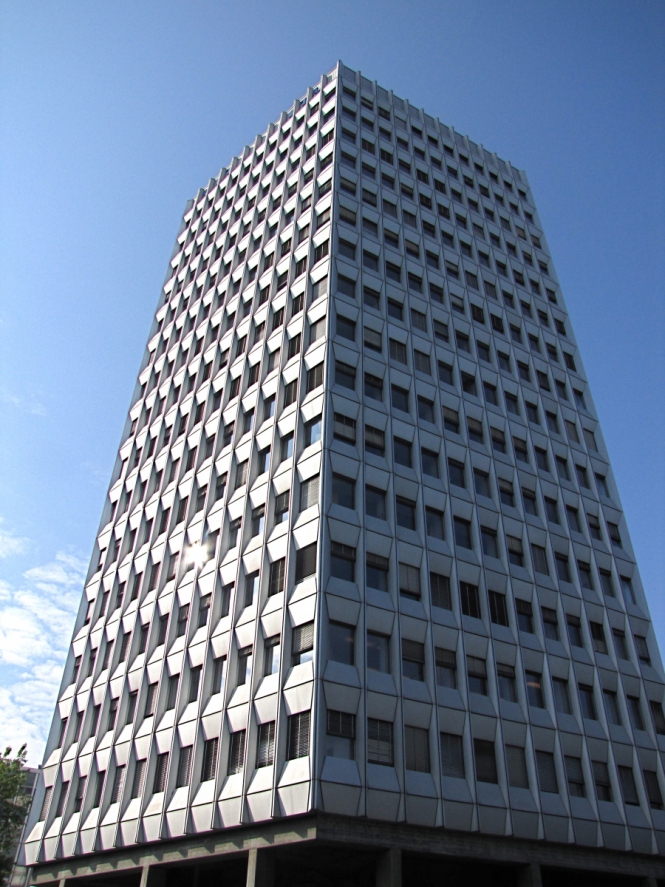 The ITU’s responsibilities multiplied so fast that it ran out of room soon after moving to Varembé. Engaged in a perpetual race against technological modernization, creating a growing need for coordination, the ITU was always in urgent need of more space. Its situation was not unique. From the mid-1960s, the entire UN system began to experience growing pains. There was never enough money –– or perhaps certainty –– to support ambitious long-term planning. Forced to play catch-up, Switzerland and Geneva did their best to meet the needs of international organizations and tailor supply to a constantly changing and unpredictable demand. In 1964, the federal and cantonal governments established the Building Foundation for International Organizations, a public body tasked with facilitating the construction and financing of new buildings.

In 1965, the ITU started planning its extension. It needed offices for another 200 to 300 employees, a conference hall, a cafeteria, and service areas. André Bordigoni and his son Didier were again in charge. They described the building that emerged on their drawing board as a “vertical element”; the word “tower” was anathema in a city that could tolerate nothing higher than Saint-Pierre Cathedral. An earlier proposal for a 100-metre-tall extension to the Palace of Nations had caused a public outcry. Bordigoni himself had been virulently criticized for a high-rise apartment block he built earlier on Rue de Vermont. Yet here he was again, thinking vertically and feeling justified in doing so, now that the square metre of land had grown so expensive. André Gutton, by then a consultant for the Genevan government, encouraged him to explore the idea of a tower like the one that stood in the same spot in Gutton’s plan for the square, now ten years old.

The 57-metre, 15-storey “vertical element”, which broke ground in May 1970, was a pentagonal structure somewhat similar to Gutton’s hexagonal tower. It was neither “triumphant” nor the blue crystal of the Parisian architect’s dreams. But the shaped aluminium panels of the façade created an effect of light and shadow that gave the building a sculptural air. Though Gutton judged the tower “quite heavy”(2), it pleased its owners and did not displease the Genevans. The Journal de Genève declared it “a success in every sense of the term” (3). 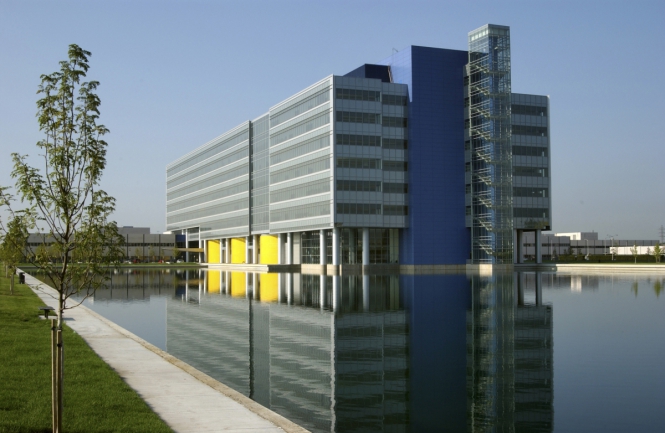 In their detailed study of the ITU headquarters, the architects Franz Graf, Germaine de Bazelaire, and Giulia Marino of the Federal Institute of Technology in Lausanne remark that André Gutton was influenced by the American architect Eero Saarinen. Gutton in turn, they write, influenced the architects responsible for the three first buildings erected on the Place des Nations: “The design of the Varembé block, with its elongated volume and smooth treatment of the envelope, subtly articulated by vertical elements which alternate transparent windows with opaque panels, is in fact deeply indebted to Eero Saarinen’s famous design [for General Motors in Detroit]. Bordigoni, along with Martin and Braillard, capably reinterpreted this unequalled model and, with their technically sophisticated façades, confirmed their status as worthy representatives of modern architectural production” (4). 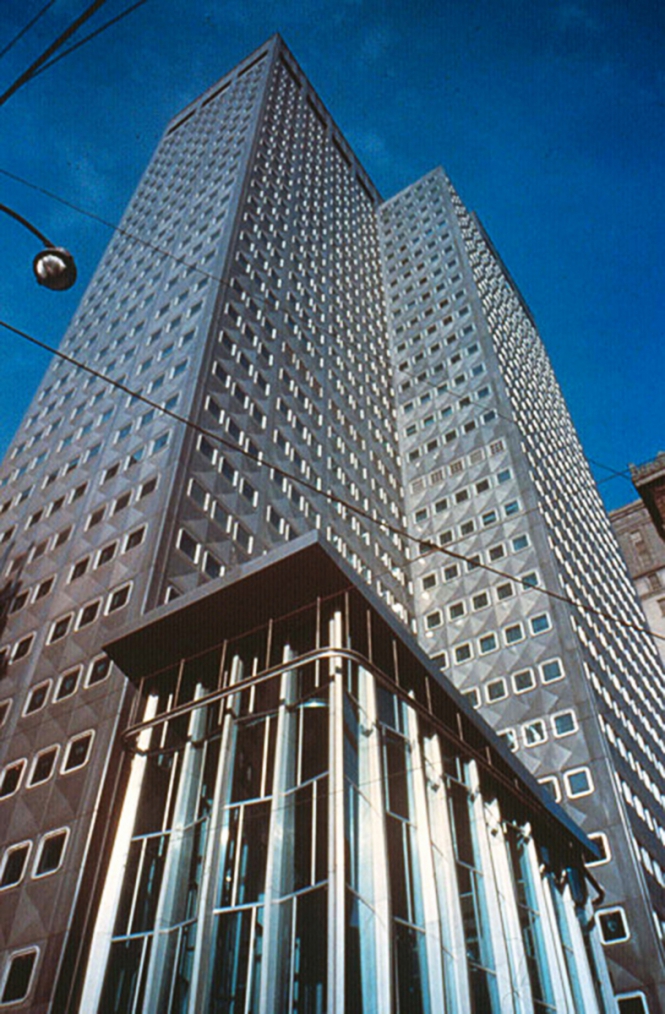 For the ITU tower, André Bordigoni’s son, Didier, inspired by the Alcoa Building in Pittsburgh, built in 1953, the first skyscraper with a facade made of shaped panels of lightweight aluminum
© Alcoa Inc.

The same researchers point to a second, more direct American influence. André Bordigoni’s son, Didier, deeply admired the Alcoa Building in Pittsburgh, built in 1953 by Harrison and Abramovitz, which was the first skyscraper with a façade made of shaped panels of lightweight aluminium. “Bordigoni followed the same tradition of ingenious reinterpretation […] He availed himself of that emblematic, visually powerful technique” to create architecture that expressed “the spirit of the time” (5).

Yet the tower and the Varembé building remained too small to house all of the ITU’s divisions. Starting in 1985, a series of annexes was built: the first in a hollow next to the tower’s entrance, the second in the space between the tower and the Geneva International Conference Centre, and the third above the entrance to the Place des Nations underground parking garage. Though functionally necessary, these annexes blur the tower’s architectural line and hinder its overall cohesion. 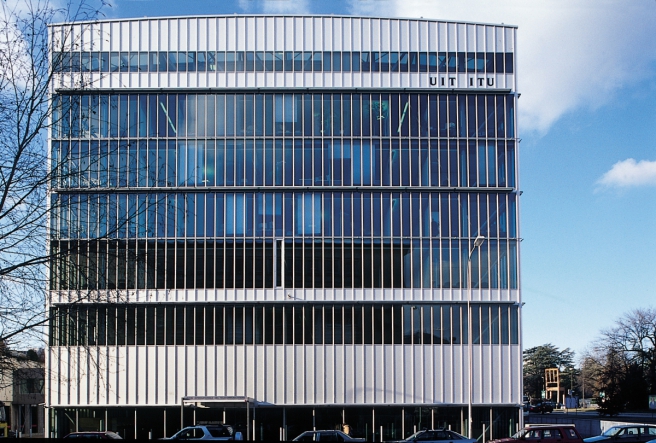 The third building on the ITU campus, built in 1999 by Maurice Currat and Jean-Jacques Oberson
© FIPOI

The most recent annex, however, is a success. This elegant building on Rue de Montbrillant, facing the Varembé block, was designed through a competition in 1999 by the architects Maurice Currat and Jean-Jacques Oberson. A light-filled gem in a beautifully restrained case, it appears modest for a reason: the Place des Nations, yet again. The simple, airy, six-storey structure was an alternative to the initially planned tower, which the city had rejected on the pretext that a tall building might jeopardize the future layout of the still-unfinished Place de Nations.

With its jigsaw puzzle of constructions and annexes, the ITU complex looks more like a campus than a flagship building. Only the tower truly stands out — a good little tower for post-war international Geneva, standing in the long shadow of some of modern architecture’s greatest masterpieces. As Laurent Wolf states in relation to art, behind the giants whose paintings in churches and museums draw admiring crowds stand many “good little artists” who mastered the styles of their time and applied their talents to commissions from bishops, princes, and parish priests. That is nothing to be ashamed of (6). 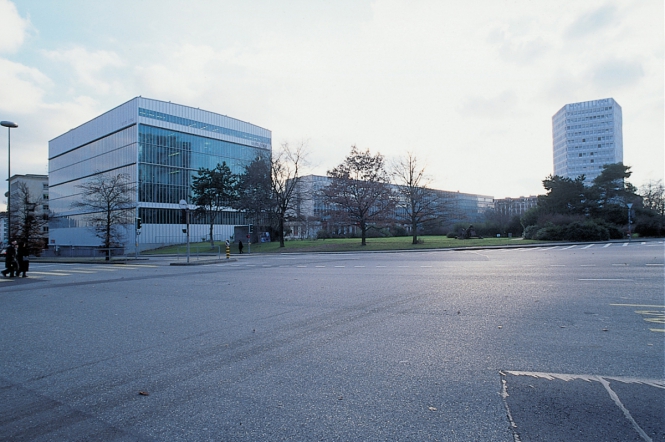 The three buildings of the ITU campus
© FIPOI